Achieving Exponential Growth in Months 6-12 of a New Website 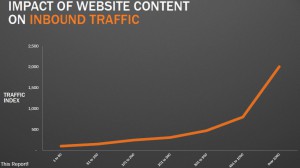 This post is the second in a two-part series outlining what typical organic website growth looks like during its first year. The concepts discussed here are based on how sites tend to appear in search results, and don’t represent any additional marketing you might undertake.

You may want to read about the first six months of a new website here before you begin.

Once you get to month 6 or so, the magic begins to happen. If you’ve been posting consistently, your site site probably has a minimum of 100 pages (a post every other day for six months) or even up to 300-400 pages (about 2 posts per day for 6 months). This is a normal range, and depends on the level of commitment you can give to your site.

Hopefully, you’ll begin to see some serious site growth at this stage. Look at the Google Analytics image above. This image is from a site I began in February 2014. By early August, it began to see a serious spike in traffic, up from next to nothing a month before.

If this spike doesn’t happen in the first 6 months of a new blog, DON’T WORRY! Keep producing content and it will usually begin before you get to month 9.

After you hit your (hopefully) exponential growth curve, your site will plateau. You will probably be getting anywhere from 100-300 organic search clicks per day in these months.

Oddly enough, this timeframe is another big failure point for new affiliates. Many people not used to the way websites grow often get discouraged when they see their tremendous growth come to a halt, and a new plateau reached. Often times, this comes with monetary expectations attached, and the individual realizes that the site is not performing as well as it could.

During this phase, you should continue to produce great content, but you also have enough data now to begin analyzing what your traffic does on your site. You can raise your conversion rates and increase revenue by A/B testing different aspects of how you monetize pages and posts.

After you get to the 1 year mark, many sites see more stable, consistent growth. This assumes that the webmaster continues to produce high quality content for relevant keywords. Sometimes this growth is linear, and sometimes it alternates plateaus with extreme growth, followed by another plateau.

Either way, by the time your site is a year old, it’s beginning to be respected by the search engines, and you’re on your way to developing a solid business.

So what should you do? Remember that in order to succeed you need to keep taking action.

If you’re new to affiliate marketing the best thing you can do is to stop thinking and get started today! That’s the only way you’ll ever achieve success online.

If you’re ready to build your site and achieve exponential success, you should click here for information on the best free affiliate marketing training!