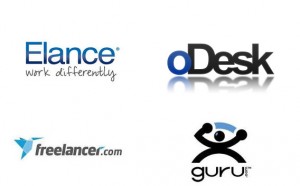 Outsourcing can be an amazing thing…or it can be a giant headache.

If you’re new to outsourcing your tasks, it can be hard to separate the best outsource marketplace websites from those that provide less than reputable services.

Choosing an established, reputable, and active marketplace or directory for finding freelancers is the first step to making sure you kick off your outsourcing efforts on the right foot.

While there are dozens, if not hundreds of marketplaces to choose from, I generally recommend going with one of the major players. Whether you’re looking for good customer service, money-back guarantees, recommended contractors, or simply a strong technology solution, each of the following companies rose to the top for a reason.

Each of the above sites is a good option for finding freelance work, though (as with any outsourcing) the quality and reliability ultimately depends upon the individual hired. If you’re new to outsourcing, you should read up on the pros and cons of outsourcing jobs and some common outsourcing mistakes before you decide to hire anyone.