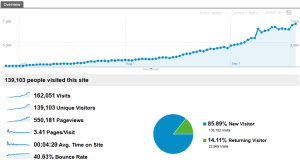 One of the biggest sources of confusion and frustration for new affiliate marketers is the challenge of getting over “the sandbox,” which is the initial few months that it takes for your site to be recognized, indexed, and vetted by Google, Bing, and Yahoo, and begin appearing in organic search results.

In this post, I’m going to break down a few different levels of traffic generation, as it pertains to the first 12 months of a new site. While the exact timeframes and traffic numbers will vary, this is a general structure of what you can expect if you’re just getting started with affiliate marketing.

The first few months are by far the most frustrating. From the day you load a new site onto a domain and publish your first page or post, you begin the long and challenging process of trying to grow your traffic.

When you first start a site, don’t be surprised if it takes several weeks, or even up to a month, before the search engines even realize that it exists. This is a natural part of the process and isn’t something you as a new marketer should worry about.

At this stage, the only way you can generate traffic to your site is to refer people directly, broadcast it via social media and/or create a paid search campaign. This is ok, because chances are in the first month or two your site is still pretty basic, so you don’t really want too many people to see it yet anyway.

Months 4-6: Initial Traffic and the Hint of a Spike

While the exact timeframe can vary significantly based on the niche and the amount and rate of content you publish on your new site, you can usually expect to see your first organic results somewhere in month 4.

Assuming you keep producing new content consistently, at this point the search engines are beginning to realize that you’re in it for the long haul. Most new websites fail at this point. Either people spend 3 months working diligently only to be discouraged by a lack of results, or the company changes direction and abandons the project, or else the site owner otherwise accepts failure.

Getting through this initial barrier is the single, most important thing you can do to ensure affiliate success. When you reach it, you’ll gain confidence in your project which will motivate you through to the next stage.

During this phase of growth, organic traffic is usually inconsistent, and pretty minor. You might see a blip of 5 clicks here, 5 clicks there, and then a small plateau somewhere in the 5-15 organic clicks per day.

Even though this isn’t a lot of traffic, it’s only the first step in beginning to get ranked for your keywords. Again, the most important thing is to keep going and push through this phase.

Ready to learn how traffic will grow exponentially after the six month mark? Click here to continue reading

Is Wealthy Affiliate a Scam? What to Know Before You Sign Up →
← Achieving Exponential Growth in Months 6-12 of a New Website