The Truth About Project Payday: Scam Or Real Opportunity? 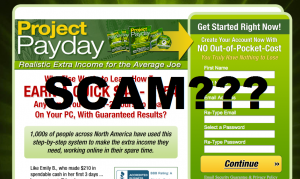 Have you stumbled across Project Payday and are trying to decide if it’s legit? Wondering if the Project Payday scam or real opportunity is something that you can use to make money online?

In this review I’ll show you what I experienced with this system, why I think it’s a scam, and why you’re better off building a legit web business.

What Is Project Payday?

Firstly, let me explain a little bit about what Project Payday is and why you might want to use it.

Basically, the idea is that you can build a business based on differences in the price of offers you can find from brand advertisers and the actual cost of completing those offers.

This works because companies often have great introductory offers to get your foot in the door, and are willing to pay affiliates (or even consumers directly) for trying a product. If you can get people to sign up using your affiliate link, you can make more from the affiliate commission than the cost of their signup, so you, as an affiliate, can pay people to sign up.

For example, think about any of the gazillion free credit score offers that are out there. Most require credit card details for a user to get a free score and 1-2 week trial period. They’ll often pay affiliates $5-20 for referring users to that free trial offer. So, if it’s a $15 affiliate offer, that means that you could pay someone $5 to signup for the offer and you’d still make a profit of $10.

The entire Project Payday system is designed around this premise, teaching you the details of how this works, and where to find people to trade signups with and earn money for everyone.

There are 4 methods, or 4 levels included with a membership. Each of these is interrelated, but you could do any one of them to make a little money…at least in theory.

I didn’t feel like there was enough information in any of the guides to really get you started. They present the basic concept of what you have to do, but don’t go into a lot of detail about how to do it. As a beginner, that’s very frustrating.

Additionally, the “extra resources” were pretty much worthless. More than half the links were broken or out of date, and most of the ones that worked were forcing you to buy a product or complete a series of lengthy offers before accessing their platform.

In other words: it reeks of a scam. But that’s not all…

The sneaky thing about Project Payday is that not one part of it passes “the smell test” of being a legitimate program, and yet they make it so easy to get started with small, free steps, that it seems like it could be worth a try.

When you first signup for Project Payday you have two options:

Naturally, I chose the free option, since I was pretty leery of the site to begin with. They had a host of offers to choose from, some requiring a purchase, others not. I picked a free offer and got access to the coveted member’s area. Woohoo.

The program tracks you through their initial “Fast Fifty.” I received an email with step by step instructions on how to sign up for an offer, which was an example of how that system works: I complete the offer and the person behind the link earned $60, for which he offered to pay me $50.

The process took a little over an hour, and the next day I received my $50 via Paypal. Awesome, right? 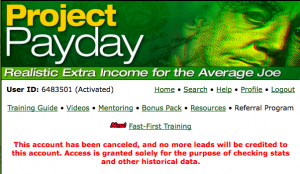 The result was that I started to think “hey, maybe this does work,” and the trainings claim that when you’re starting out, $50 per hour of work is a reasonable goal, and it will increase later. So, I dug a little deeper and started completing offers, some of which I paid small sums for. For example, I got a $1 Audible membership, etc etc.

Meanwhile, every action I take is adding up to dollars in my account. It wasn’t a lot of money, but it was a fun experiment. I even referred a few people to try it out.

Long story short: I never received a payment and my account was banned.

I ended up earning a ton of “credits” within their system, which were supposed to be paid as cash to me. Then, when it came time for payday, I received an email that said my account had been banned and no payments would be issued!

Not only that, but each person I referred had the same experience.

Then I asked around in the community at Wealthy Affiliate and found similar complaints and issues.

Many people had received some money easily, only to be banned and denied later.

My Advice: Focus On A Real Business

I never once thought that Project Payday would be a good option for providing me with substantial income. But, I figured that if I could get a few hundred a month, it might be worthwhile.

That was a huge mistake.

Even if they hadn’t banned my account, I never quite felt like the methods they used were quite right. The entire premise of their system is basically screwing brands out of cash by taking advantage of special offers. While it’s all legal, it a few steps closer to fraud than I like to be.

Instead, I think it’s better to focus your time and energy on building a real business, rather than making a quick buck. There are a lot of ways to do this, but in the end, I’ll stick to working on affiliate sites.

Rather than scamming a company to earn $50 here and there, you can have a real asset that will pay consistent dividends each month. For that, I recommend the free training over at Wealthy Affiliate.

A Little Motivation To Build Your Online Business: The Strangest Secret Revealed! →
← Does Swagbucks Work? The Ultimate Swagbucks Review for 2015